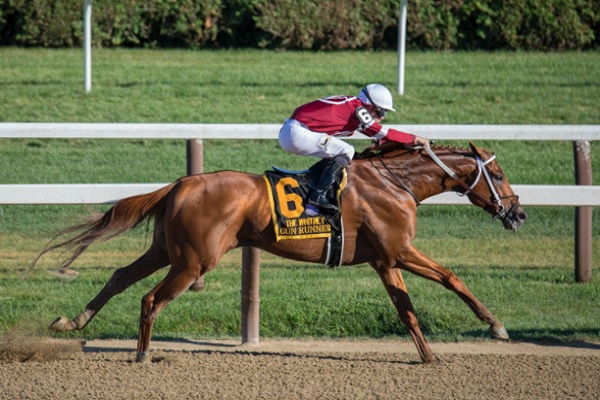 The best jockeys have been to the world’s most challenging horse race competitions like Belmont Stakes. These jockeys have ridden the best horses in Belmont stakes as well, a rite of passage that shows their skills in horse racing in one of the most prestigious derbies in the world.

Now, here’s a list of the top-performing jockeys throughout the history of Belmont Stakes, including their brief stories of success and persistence.

For several years, James McLaughlin was the best jockey in the United States. He was a great jockey, but he had an advantage over other jockeys since he rode for the Dwyer Stable, which provided him with plenty of opportunities to ride and win on good horses.

Because of his unsatisfactory results as a rider, James McLaughlin exited the Dwyer Stable in 1888. His problems arose as a result of weight gain as he grew older, as well as personal issues in his marriage. Worries about his personal life have harmed his ability to concentrate on his riding.

Krone’s first Kentucky Derby attempt was on Ecstatic Ride in 1992, followed by a Belmont Stakes mount the same year. Krone and her horse, Colonial Affair, won the Belmont Stakes on June 5,1993, marking her the first female jockey to win a Triple Crown race.

She is a member of the National Museum of Racing and Hall of Fame, as well as the National Women’s and Cowgirl Halls of Fame.

Baeza won the Belmont three times in his time. He was one of the first Latino riders to win the Kentucky Derby, mounting Chateaugay to victory in 1963. Before participating in Europe and Canada, he won the Belmont Stakes three times, in 1961, 1963, and 1969.

His most notable Belmont success came in 1963 when he drove Chateaugay to a convincing victory over Candy Spots and Bill Shoemaker.

Arcaro owns the record for the most victories of 6 in the Belmont Stakes at its present venue in Elmont. He’s also the only rider to have won two Triple Crowns.

The rider known as “The Master” rode a remarkable 17 winners in these races for 3-year-olds during an 18-year period, becoming the only jockey to be riding two Triple Crown winners who were Whirlaway and Citation.

With Count Fleet in 1943, Longden won the Triple Crown. After retiring as a jockey after 40 years, he served as a trainer and won the Kentucky Derby and Preakness Stakes with Majestic Prince in 1969. Longden was also a founding member of the Jockeys’ Guild, which was founded in 1941 by another Hall of Famer, Eddie Arcaro, and Sam Renick.

Longden retired with a record of 6,032 victories, which he held until Bill Shoemaker, who was then passed by Laffit Pincay Jr.

He rode Affirmed to triumph in all three of racing’s crown jewels, each of which was a genuine horse race. He won by a length and a half in the Kentucky Derby, a neck in the Preakness, and a head in the Belmont. His total Triple Crown victory margin was less than two lengths.

Cauthen won the Triple Crown at the age of eighteen.

Secretariat’s magnificent 31-length tour de force in the 1 12-mile Belmont was the result of meticulous planning by trainer Lucien Laurin and jockey Ron Turcotte. They never lost sight of the Triple Crown’s big prize, resulting in remarkable triumphs in the Derby and Preakness.

Fans will always remember Secretariat and Turcotte blazing across the Belmont finish line, but there was more to the rider’s career than that. You can also refer to Turcotte’s best work with Riva Ridge. He prepared that incredibly high-strung colt to keep up his crackling speed for a distance.

Because Mike Smith led the Justify properly, the colt won the Belmont Stakes and became only the 13th horse to win the Triple Crown.

In summary, Smith has won the Kentucky Derby twice, once on the longshot Giacomo in 2005 and again in 2018 on the favourite Justify. Smith has a 2-4-1 career record in 26 Kentucky Derbys, riding in six of the last seven and 16 of the last 17, missing out just in 2014.

Sande, the pride of Groton, was a Hall of Fame jockey who won 968 races for a total prize of $3 million between 1918 and1932, an incredible sum in those days that made him a big star.

His best achievement came in 1930 when he recovered from a bad fall to ride Gallant Fox to victories in the Preakness, Kentucky Derby, and Belmont Stakes.

Victor Espinoza rode American Pharoah to victory in the 2015 Kentucky Derby, Preakness, and Belmont Stakes. He became the first jockey in 37 years to win the Triple Crown.

It’s usually tough to compare jockeys from different ages and countries, as well as various riding techniques. In a horse race like Belmont Stakes, jockeys who are highly competitive and competent can get to the list of the best.