It is sick to imagine owning men so they can fight each other to death for your gain, but that was normal at one point in ancient Rome. Gladiators were slaves and sometimes free men that fought fellow gladiators, animals or even condemned criminals for entertainment and, of course, lots of profit for their owner. So, in Ancient Rome, if you were a condemned criminal, you could be sent to the arena to fight against a well-trained Gladiator, Say Gannicus. If you killed him, good for you. While the practice was barbaric and their deaths gut-wrenching, some managed to become so good at it that they were considered gods.

Almost everyone knows this one, thanks to the Starz miniseries by the same name released in 2010. While the accounts of the series are not exactly in line with everything in the history books, Spartacus’s fame was real. He was formerly a soldier (or a mercenary, accounts differ) before he was captured and sold to a Ludis in Capua to fight as a slave.

He was a great fighter but also a good leader that managed to lead the around 70 slaves and other gladiators to revolt against their master Batiatus Lentulus, kill the Roman Legions and escape with lots of armour and weapons. He then led the revolt that saw nearly 100,000 slaves and peasants take up arms against Rome until they were defeated in 73BC.

There is no record of Commodus winning any major gladiatorial combat, but being an emperor that fought in the arena, he remains very famous. Commodus was more of a comedian than a gladiator since he wasn’t such a good fighter, just an insane emperor. He was the son of Marcus Aurelius but not as smart as his father. He was insane enough to think that he was the demigod Hercules which is why he started fighting in the arenas to try and prove his strength.

He never fought fairly, though, since the slaves he beat and killed were in most cases afraid of harming the emperor since they would be killed if they did. He also enjoyed the brutality of killing physically handicapped people and tied gladiators who stood no chance against him. He was finally assassinated in 192 by a wrestler paid by his advisers to the relief of the empire.

A BBC documentary titled Colosseum: A Gladiator’s story is about these two gladiators who were both considered victorious after a prolonged battle. They fought as part of the opening games of the famous Colosseum, which went on for 100 days. Not much is known about their origin or other battles they fought before they met each other in the arena, but according to the Roman poet Martial, they were great fighters. They fought each other for a long time until they both surrendered to one another at the same time. The emperor Titus who was watching the fight, gave both of them a wooden sword which effectively meant that they were both victorious and free men.

There are few details on how good this gladiator was in the arena, but his role in the Third Servile War against the Romans alongside Spartacus is well detailed. Crixus was one of the 70 slaves that escaped from Lentulus Batiatus’ Ludus in Capua and was elected alongside Spartacus and Oenomaus to lead the slaves and peasants in the war against Roman Legions.

He was a Gaul who had fought alongside Spartacus for long enough to earn his respect as Spartacus made him his right-hand man. Crixus wasn’t as good a general as Spartacus, though, since his group was attacked and killed in the early response of the Roman legions against the revolt.

Some people believe that he was a Gladiator of African descent, having come from North Africa, but it is hard to tell if that is really true. The only fact about him is that he was so good a fighter that he got the attention of the emperor Nero. Nero gave him lots of wealth and made him a high-ranking citizen before things went bad in the capital for the disturbed emperor. When Nero was toppled, he tried to get someone to take his life, he asked for Spiculus specifically, but he couldn’t get him in time, so he committed suicide. Not much is known about the gladiator after the emperor died, but he remains one of the most famous Gladiators of the era. 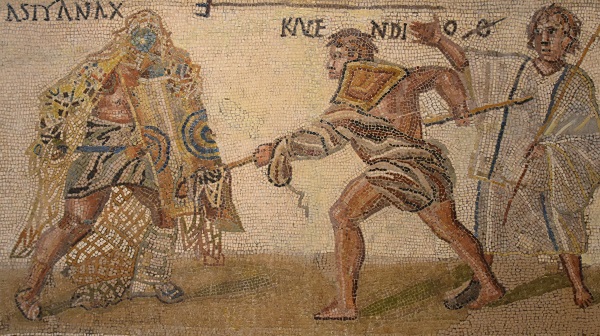 Flamma is just Latin for The Flame and is the only known gladiator that was offered freedom four times and rejected it. He was a Syrian Gladiator whose reason for being enslaved isn’t known. Actually, the only information about him was found on a Tombstone in Sicily. It said he died at the age of 30 after winning twenty-one of his 34 fights and drawing nine times.

It was also written that he drew four times, suggesting that the last fight is the one in which he got killed. The four times he lost, the crowds shouted Missio (Mercy), allowing him to continue fighting, which means he was really loved as a gladiator. He was still a slave, though, and the only good thing he got was that someone agreed to pay for his tombstone.

Being a gladiator made you famous, but you were still a slave, and the line between you and death was very thin. That is why you didn’t find many freeborn people willingly volunteer to become gladiators, but Marcus Attilius did. It is believed that Attilius was on the verge of bankruptcy which meant he would have been sold to slavery sooner or later if he didn’t figure out a way to make some money. In his first fight, he won against Hilarus, emperor Nero’s gladiator, who had already won 12 battles in the arena. It was a miracle for an amateur to defeat such a veteran fighter. It is not clear how many more victories he won, but he made enough money to stay a free man.

Gladiators who fought against animals in the ring were called Bestiaries, but the art wasn’t so famous because many of them died. With such a low life expectancy, it is hard to come across any records of these gladiators except this particular one praised by the poet Martial. Martial wrote of a battle in which Carpophorus singlehandedly fought 20 beasts in the ring, including a bear, a lion and a leopard. He seems to have been so good at killing lions and leopards in the ring and must have won many battles for Martial to include him in his poems.

This is one of those gladiators that much is not known about except for the praise they earned in Martial’s poems. Martial only dedicated a single line to Hermes. He said that he was a very skilled gladiator that could fight using any kind of weapon in the arena. There are some rumours that his tomb was discovered somewhere in Europe, but that has not been proven scientifically.

It is not every day that you hear a woman named a great fighter in the ring in Ancient Rome, but this one is worth mentioning. Female gladiators were called gladiatrix, and most of the male writers in the era didn’t document their fights as they were looked at only as a curiosity. Mevis was a Bestiarus just like Carpophorus and used to hunt boars in the arena with a spear. She allegedly did it with her breasts exposed to add to the fun.