It is that time of year when people all over the Western world are clearing their driveways and pathways from snow, but not everyone can afford a ride-on snowplough. So what some people have done is make their own Snowplows and I have hand-picked ten of the craziest ones you will ever see. Some are simply crazy, others are a touch of genius, but they are all something to make you smile as you look out your window at your own snow cover ground… 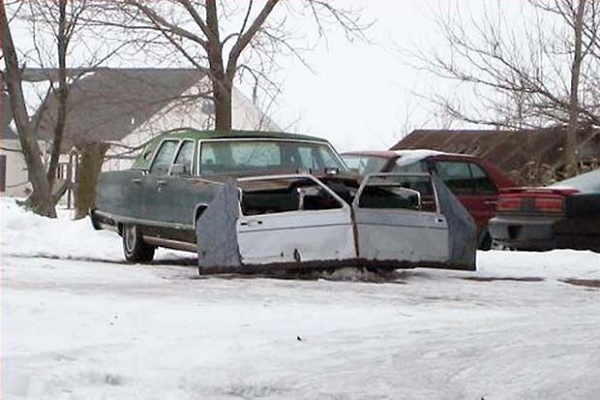 Door to a Clean Driveway

Yes, that really is a car with two old car doors welded onto it making a snow dozer on the front of it. I just hope the windows on the car doors are not open otherwise it will let more snow into the car! I have to say this is quite clever so I have to give respect to the crazy idea. 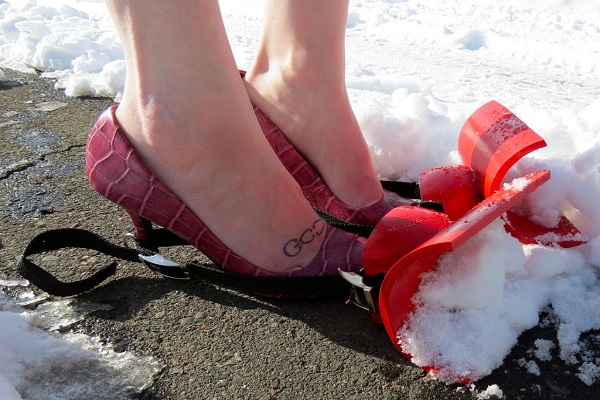 These Ploughs Were Made for Walking

These are called ‘Toe Ploughs’ and they are made to clear your path as you walk down it. I am sure they would if you are willing to scuff your shoes alone the ground, but I can’t see anyone in high-heels doing that. 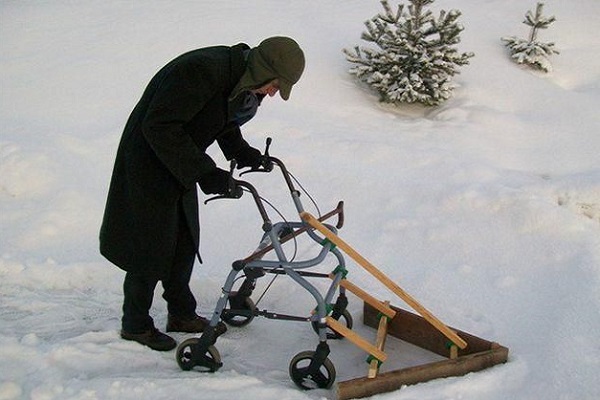 While it isn’t going to be the fastest way to clear your paths and driveways I am sure it will get there in the end. Besides, your grandpa always looks like he needs a long walk at Christmas so this could be a great use of all that energy he has. 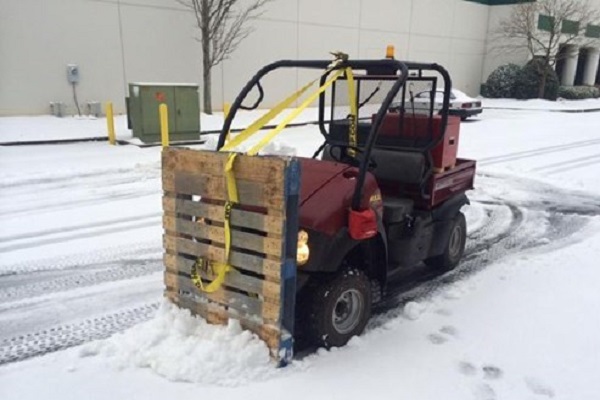 Having worked in a warehouse for years I know you often need to clear the yard before unloading a truck. I just wish had come up with this idea myself. I do have to question the use of a pallet with slits in, but I guess you just have to use what you have around you. 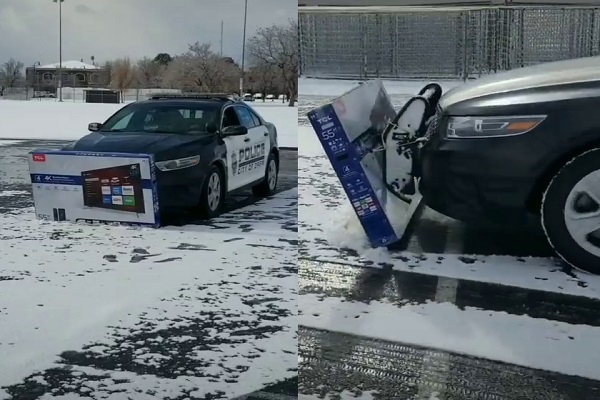 I’m not sure a TV box is going to make a good plough, but I guess it would be strong if the TV is still in it. I am sure this image was taken as more of a joke, but I have seen other people using a TV box as well, so I guess it works better than I would imagine. 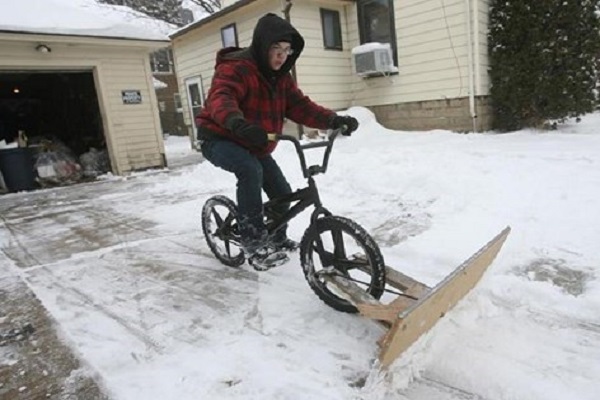 Plenty of people have turned their old bicycles into makeshift snowploughs but I went with this one because I love the simplicity of it. I can see someone flying over the handlebars as soon as they hit a compacted bit of snow, but it would be fun to watch them use it that is for sure. 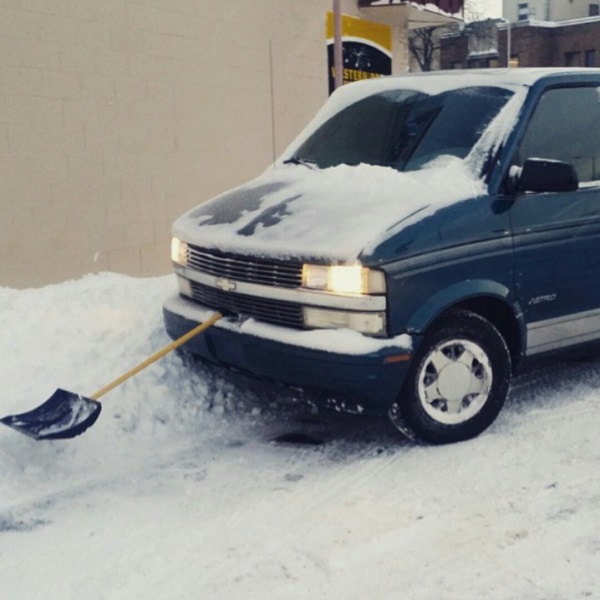 Just when I thought the TV on the cop car was a daft idea alone comes this one that is kind of pointless. I guess that this was taken as more of a joke than something that would clear a path in the snow, but you just never know how stupid some people can be these days. 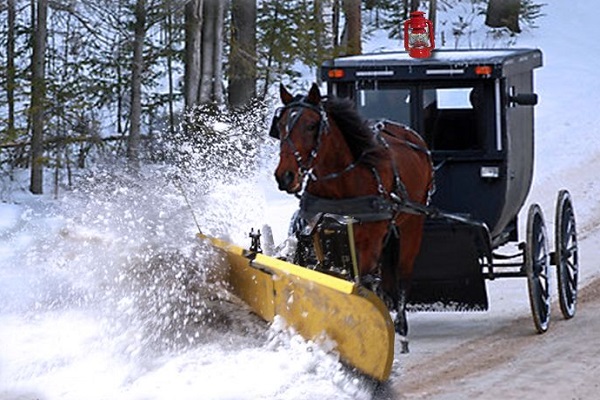 If this isn’t a photoshopped image that has to be the strongest horse I have ever seen! Or maybe it is real and I am underestimating how strong a horse is while jogging along. Either way, it made me smile in a puzzled kind of way. 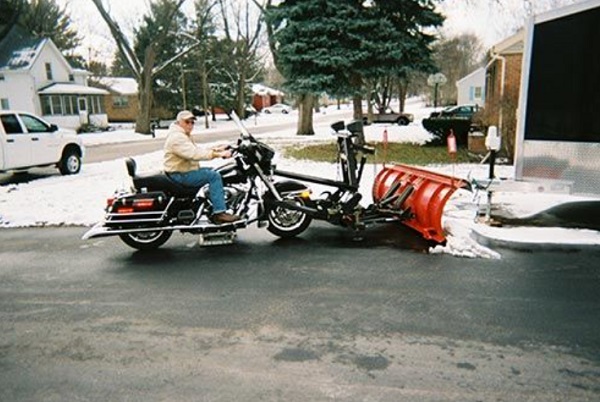 Only a big bike like a Harley-Davidson could be turned into a snowplough, but it sure is a good way to look cool while clearing the paths and driveways of your fellow riders. I can’t imagine it is the easiest thing to ride, but I would love to give it a go. 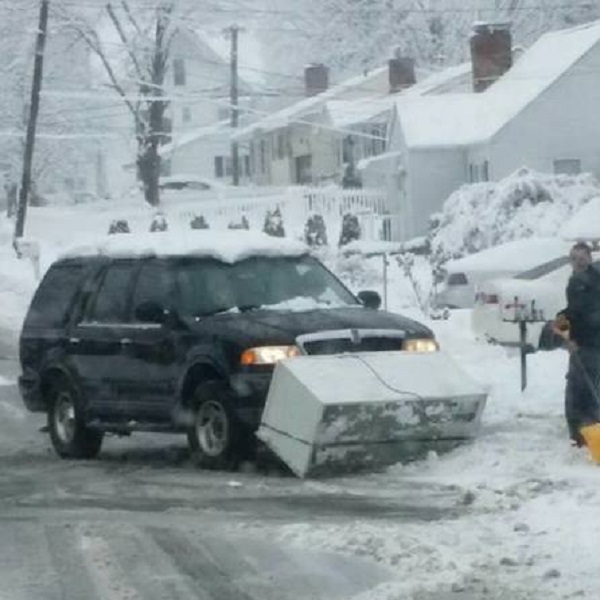 And finally the best use of a fridge I have seen since I saw someone shooting down a hill in the snow using a refrigerator as a toboggan. Provided you don’t wreck your car trying to pull this off I think this is kind of genius in a crazy sort of way.

Do you have a good way of clearing your snow from the path or driveway? If you do please let me know in the comments below.